Description of the People of Ad

The people of Ad lived many years in the windswept hills of an area between Yemen and Oman. They were physically well-built and renowned for their craftsmanship especially in the construction of tall buildings with lofty towers. They were outstanding among all the nations in power and wealth, which, unfortunately, made them arrogant and boastful. Their political power was held in the hand of unjust rulers, against whom no one dared to raise a voice.

They were not ignorant of the existence of Allah, nor did they refuse to worship Him. What they did refuse was to worship Allah alone. They worshiped other gods, also, including idols. This is one sin Allah does not forgive.

Allah wanted to guide and discipline these people, so He sent A prophet from among them. This prophet was Hud , a noble man who handled his task with great resoluteness and tolerance.

Ibn Jarir reported that he was Hud Ibn Shalikh, Ibn Arfakhshand, Ibn Sam, Ibn Noah . He also reported that Prophet Hud was from a tribe called Ad Ibn Uus Ibn Sam Ibn Noah, who were Arabs living in Al-Ahqaf in Yemen between Oman and Hadramaut, on a land called Ashar stretching out into the sea. The name of their valley was Mughiith.

Hud condemned idol worship and admonished his people: "My people, what is the benefit of these stones that you carve with your own hands and worship? In reality it is an insult to the intellect. There is only One Deity worthy of worship and that is Allah. Worship of Him, and Him alone, is compulsory on you.

"He created you, He provides for you and He is the One Who will cause you to die. He gave you wonderful physiques and blessed you in many ways. So believe in Him and do not be blind to His favors, or the same fate that destroyed Noah's people will overtake you."

With such reasoning Hud hoped to instill faith in them, but they refused to accept his message. His people asked him: "Do you desire to be our master with your call? What payment do you want?"

Hud tried to make them understand that he would receive his payment (reward) from Allah; he did not demand anything from them except that they let the light of truth touch their minds and hearts.

Allah the Almighty states: And to 'Ad (people, We sent) their brother Hud. He said, "0 my people! Worship Allah! You have no other Ilah (god) but Him, Certainly, you do nothing but invent (lies)! 0 my people I ask of you no reward for it (the Message). My reward is only from Him Who created me. Will you not then understand? And 0 my people! Ask forgiveness of your Lord and then repent to Him, He will send you (from the sky) abundant rain, and add strength to your strength, so do not turn away as Mujrimeen (criminals, disbelievers in the Oneness of Allah)."

They said: "0 Hud! No evidence have you brought us, and we shall not leave our gods for your (mere) saying! And we are not believers in you. All that we say is that some of our gods (false deities) have seized you with evil (madness)."

He said: "I call Allah to witness and bear you witness that I am free from that which you ascribe as partners in worship with Him (Allah). So plot against me, all of you, and give me no respite. I put my trust in Allah, my Lord and your Lord! There is not a moving (living) creature but He has grasp of its forelock. Verily, my Lord is on the Straight Path (the truth). So if you turn away, still I have conveyed the Message with which I was sent to you. My Lord will make another people succeed you, and you will not harm Him in the least. Surely, my Lord is Guardian over all things." Surah 11: 50-57

Hud tried to speak to them and to explain about Allah's blessings: how Allah the Almighty had made them Noah's successors, how He had given them strength and power, and how He sent them rain to revive the soil.

Hud's people looked about them and found they were the strongest on earth, so they became prouder and more obstinate. Thus they argued a lot with Hud. They asked: "0 Hud! Do you say that after we die and turn into dust, we will be resurrected?" He replied: 'Yes, you will come back on the Day of Judgment and each one of you will be asked about what you did."

A peal of laughter was heard after the last statement. "How strange Hud's claims are!" The disbelievers muttered among themselves. They believed that when man dies his body decays and turns into dust which is swept away by the wind. How could that return to its original state? Then what is the significance of the Day of Judgment? Why do the dead return to life?

All these questions were patiently received by Hud. He then addressed his people concerning the Day of Judgment. He explained that belief in the Day of Judgment is essential to Allah's justice, teaching them the same thing that every prophet taught about it.

Hud explained that justice demands that there be a Day of Judgment because good is not always victorious in life. Sometimes evil overpowers good. Will such crimes go unpunished? If we suppose there is no Day of Judgment, then a great injustice will have prevailed, but Allah has forbidden injustice to be incurred by Himself or His subjects. Therefore, the existence of the Day of Judgment, a day of accounting for our deeds and being rewarded or punished for them, reveals the extent of Allah's justice. Hud spoke to them about all of these things. They listened but disbelieved him.

Allah recounts his people's attitude towards the Day of Judgment: And the chiefs of his people, whom disbelieved and denied the meeting in the Hereafter, and to who We had given the luxuries and comforts of this life, said: "He is no more than a human being like you, he eats of that which you eat, and drinks of what you drink. If you were to obey a human being like yourselves, then verily! You indeed would be losers. Does he promise you that when you have died and have become dust and bones, you shall come out alive (resurrected)? Far, very far, is that which you are promised. There is nothing but our life of this world! We die and we live! And we are not going to be resurrected! He is only a man who has invented a lie against Allah, but we are not going to believe in him." Surah 23: 33-38

The chiefs of Hud's people asked: "Is it not strange that Allah chooses one of us to reveal His message to?"

Hud replied: "What is strange in that? Allah wants to guide you to the right way of life, so He sent me to warn you. Noah's flood and his story are not far away from you, so do not forget what happened. All the disbelievers were destroyed, no matter how strong they were."

"Who is going to destroy us, Hud alaihissalam?" the chiefs asked.

The disbelievers among his people answered: "We will be saved by our gods."

Hud clarified to them that the gods they worshipped would be the reason for their destruction, that it is Allah alone Who saves people, and that no other power on earth can benefit or harm anyone.

The conflict between Hud and his people continued. The years passed, and they became prouder, more obstinate, more tyrannical and more defiant of their prophet's message.

Furthermore, they started to accuse Hud of being a crazy lunatic. One day they told him: "We now understand the secret of your madness: you insulted our gods and they harmed you; that is why you have become insane."

Almighty Allah repeated their words in the Qur'an: "0 Hud! No evidence have you brought us, and we shall not leave our gods for your (mere) saying! And we are not believers in you. All that we say is that some of our gods false deities) have seized you with evil (madness). Surah 11: 53-54

Hud had to return their challenge. He had no other way but to turn to Allah alone, no other alternative but to give them a threatening ultimatum. He declared to them: "I call Allah to witness and bear you witness that I am free from that which you ascribe as partners in worship with Him (Allah). So plot against me, all of you and give me no respite. I put my trust in Allah, my Lord and your Lord! There is not a moving (living) creature but He has grasp of its forelock. Verily, my Lord is on the Straight Path (the truth). So if you turn away, still I have conveyed the message with which I was sent to you. My Lord will make another people succeed you, and you will not harm Him." Surah 11: 54-57

Thus Hud renounced them and their gods and affirmed his dependence on Allah Who had created him. Hud realized that punishment would be incurred on the disbelievers among his people. It is one of the laws of life. Allah punishes the disbelievers, no matter how rich, tyrannical, or great they are.

Hud and his people waited for Allah's promise. A drought spread throughout the land, for the sky no longer sent its rain. The sun scorched the desert sands, looking like a disk of fire which settled on people's heads.

Hud's people hastened to him asking: "What is that drought, Hud?"

Hud answered: "Allah is angry with you. If you believe in Him, He will accept you and the rain will fall and you will become even stronger than you are."

They mocked him and became more obstinate, sarcastic and perverse in their unbelief. The drought increased, the trees turned yellow, and plants died.

A day came when they found the sky full of clouds. Hud's people were glad as they came out of their tents crying: "A cloud which will give us rain!"

The weather changed suddenly from burning dry and hot to stinging cold, with wind that shook everything: trees, plants, tents, men and women. The wind increased day after day and night after night.

Hud's people started to flee. They ran to their tents to hide, but the gale became stronger, ripping their tents from their stakes. They hid under cloth covers, but the gale became stronger still and tore away the covers. It slashed clothing and skin. It penetrated the apertures of the body and destroyed it. It hardly touched anything before it was destroyed or killed, its core sucked out to decompose and rot. The storm raged for eight days and seven nights.

Almighty Allah recounts: Then, when they saw it as a dense cloud coming towards their valleys, they said: "This is a cloud bringing us rain!" Nay, but it is that (torment) which you were asking to be hastened! – a wind wherein is a painful torment! Destroying everything by the command of its Lord! Surah 46: 24-25

Allah the Exalted described it thus: And as for 'Ad, – they were destroyed by a furious violent wind which Allah imposed on them for seven nights and eight days in succession, so that you could see men lying overthrown (destroyed) as if they were hollow trunks of palm trees! Surah 69: 6-7

The Believers are Saved

That violent gale did not stop until the entire region was reduced to ruins and its wicked people destroyed, swallowed by the sands of the desert. Only Hud and his followers remained unharmed. They migrated to Hadramaut and lived there in peace, worshiping Allah, their true Lord. 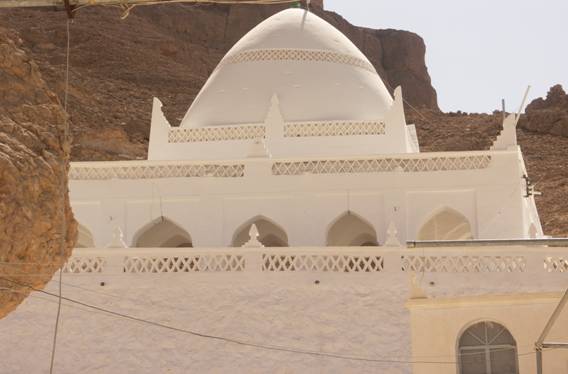 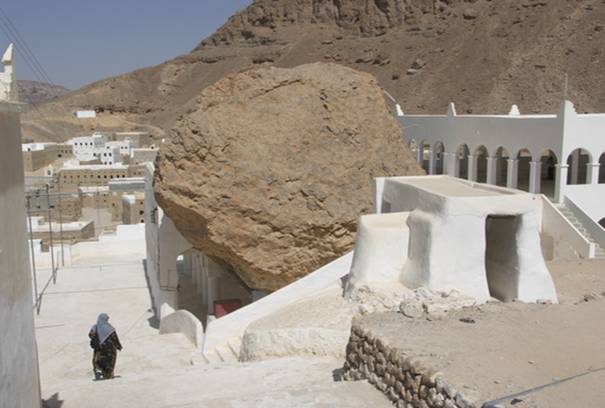 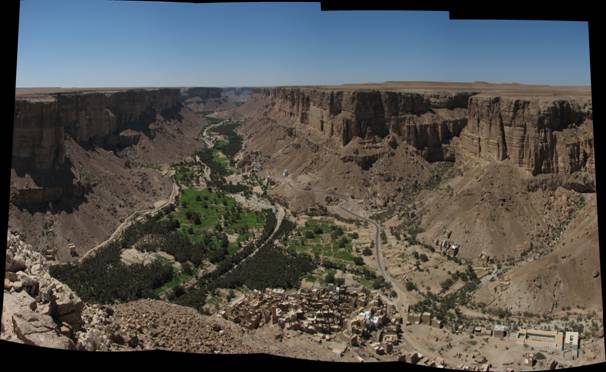